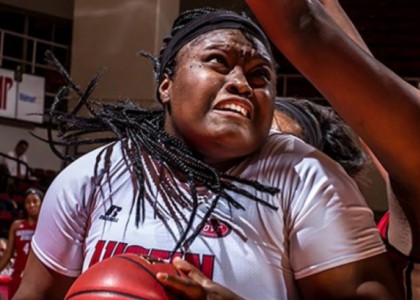 American Tearra Banks (188 cm, 1995) proved to be a nearly unstoppable force in leading Beroe to the 2017-18 BTravel WABA Superleague Top 8. Despite this being her first campaign in Europe, Banks led the competition in scoring (22.8), rebounding (12.2) and index performance rating (27.0), which where among the many reason Banks is deserving of 2017-18 BTravel WABA League Group Stage MVP honors.

Tearra, congratulations on beeing the BTravel WABA League for December and for Group Stage. Beroe had a 3-0 record in December and you had four double-doubles off the bench in the second part of the season. What does this mean to you?

»Thank you… And to come off the bench and still average a double-double is an amazing feeling and it was also and amazing feeling to bounce back and go 3-0 after two loses!«

You and your team responded to a tough, home defeat against Tresnjevka 2009. How did you girls shake that off and came on so strong after it?

»After the loss we knew we had to come harder to for the rest of the games. We just came together as team and played team ball to get the wins we needed to advance. After that loss we just did everything we could to try not to take anymore.«

You started all five games on the bench. However, you are ranked first among all BTravel WABA players during the Group Stage season in average index rating, scoring and rebounding. It seems that you are really enjoy in the role of the sixth player.

» Coming off the bench does not bother me. I just know when I’m called or when ever it is my time to play I just need to be ready. At the end of the day we all are on the same mission and that’s to win.«

Beroe is the reigning runner-up of the BTravel WABA League. You are now only one win behind the fourth ranked Partizan 1953 and Montana 2003. Beroe will play against both teams in the Superleague. How can you reach Final-Four?

»To reach the final four we just have to play as a team and make sure we play team ball together. We all have to be on the same page and have the same mission which is to WIN by any means.«

It is your rookie pro season. You started the 2017-18 season in Israel and in mid-November moved to Bulgaria. What do you expect of the season in Europe and what is your main goal in basketball?

»I expect there to be challenges, I excepted everything to be completely different. I also expected to enjoy myself playing ball which is what I love to do. My main goal in basketball is to excel wherever am, to keep advancing no matter what team or what country I’m in. And no matter where I am be a player that can help my team and my teammates.«